Ever since their 2009 release Masterpiece Theatre, Marianas Trench has been constructing concept albums that make use of melodies that recur throughout and circle around in the final track to reference the whole album.  It makes listening to their albums an extremely interesting experience, and one that cannot be properly appreciated through a single listen. 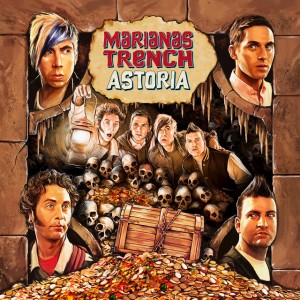 I’ve been listening to Astoria, their fourth studio album released on October 23rd, 2015, for some time now, and though I’ve struggled with trying to semi-objectively review it even after all that time because of how emotional an album it is for me, the time’s come that I do so.  At 17 tracks, this hour-long album is a dramatic and emotional journey of some ups and a lot of downs in lead singer Josh Ramsay’s life over the time since the band’s release of Ever After in 2011.

Astoria was originally conceived as a concept album based on The Goonies (as the album artwork indicates).  However, Ramsay faced immeasurable difficulties when his mother was diagnosed with dementia and the mounting pressure of writing Astoria led to the dissolution of his relationship with his fiancé, with the result of all of this being his hospitalization in early 2015.  Ramsay’s struggles came to dictate the album’s direction, and that shift is palpable within Astoria’s raw, honest lyrics.  Listening to it frequently feels like a direct line into Ramsay’s diary, and that element of unapologetic honesty is what makes it such a powerful album.

Musically speaking, the pop-rock concept album is filled with Marianas Trench’s traditional vocal harmonies and displays Ramsay’s vocal talents while also drawing its inspiration from the ‘80s with a variety of references and allusions, some of which subtler than others.  There are definitely instances where you’ll find yourself doing a double-take due to the striking resemblances, like with the blatantly “Sweet Dreams (Are Made Of This)”-inspired section of the opening track, or throughout “Shut Up And Kiss Me,” which sounds so much like The Jackson 5 that Ramsay acknowledges it in the song’s closing lines of “don’t sound like Mike did / but it’s all right for a white kid.”  Still, while the album pays overt homage to the ‘80s in some places, it also holds its own as a modern release.

The album starts off strongly with the 7-minute title track, immediately setting the tone for the struggles Ramsay endured in the period of time he refers to as Astoria.  Fading in with a growing drumbeat that’s slowly joined by strings, piano, and eventually the full extent of bass and electric guitar, the first three minutes of the song are one of the strongest parts of the album.  It loses some steam within its key changes in the remainder of the song, but overall powerfully deconstructs fairy tale notions and clichés while presenting disillusionment, particularly as Ramsay sings “Whatever doesn’t make me stronger kills me.”  It even manages to do so in a reference to the album’s original inspiration of The Goonies as it proclaims, “I’ll find out in all due time / what happens to ‘never say die.’”

Much of the album follows Ramsay’s back-and-forth with his fiancé, from questioning “Is it bad enough to call it off?” in the upbeat “Burning Up” to expressing his fears about losing her in the strings-filled “One Love” by asking repeatedly, “What if the one true love’s the only one that you get?”  He later turns to acknowledging his difficulties in getting back on his feet in “Who Do You Love,” which contains a vocal intro reminiscent of fun.’s “Some Nights” and draws upon general inspiration from Toto’s “Africa.”

Though the album shines pretty consistently, two notable tracks are “Dearly Departed,” a soft ukulele-backed number, and “Forget Me Not,” a piano ballad reminiscent of Ever After’s “So Soon.”  The former laments what ifs before reaching a climax of soaring vocal harmonies in a bridge containing a remarkable string of references to past Marianas Trench songs, while the latter is a mournful piece that powerfully mourns, “Life’s too short / but the end is so long.”

“Shut Up And Kiss Me” is one place in which Astoria stumbles a bit.  While an undeniably catchy, upbeat number, it breaks the album immersion for me, both with its self-awareness of its inspiration and its blindly positive mood.  Astoria treads some dark paths and a balance is necessary, but unlike other “up” numbers like “Burning Up” and “Yesterday,” “Shut Up And Kiss Me” just doesn’t follow naturally from the vibe established by the title track.

It’s also important to mention the five instrumental, transitionary tracks on Astoria.  In general, I find artists’ use of this type of track to be compelling as a means of aiding an album’s flow and cohesion.  Criticisms of them as “filler tracks” have always felt to me to be too dismissive, and Astoria’s are all beautifully orchestrated (if brief) pieces, enjoyable in their own right.  However, the first few transitionary tracks disrupt album cohesion for me more than they contribute to it.  Even the latter ones that flow between tracks are not as effective as the extended outros that the band used in Ever After.  I don’t see it as a huge issue—at best, it mixes up the album at the cost of some of the flow, and at worst, it’s three and a half minutes of an hour-long album that you’re skipping—but it’s something to keep in mind.

In the end, if you listen to nothing else on the album, make it album closer “End Of An Era,” which as far as I’m concerned is the ultimate Marianas Trench song to date.  Starting off with an a capella intro, it builds in energy through extensive orchestration and vocal harmonies, eventually breaking into a return to the rock mood that the album began on.  Within the song, Ramsay finds closure on this period of his life and moves forward, but not before nearly 8 minutes of heartrending lyrics and an impressive number of seamlessly implemented references to their entire catalogue of music, from lyrical callbacks going back as far as their debut EP to bringing back melodies from all three of their other full-length albums.  This most poignantly manifests in the climax of the song nearly five minutes in, when Ramsay sings, “I gave in to sickness / can you find forgiveness / for a dear old friend / so Astoria can end” to the tune of Ever After’s “Porcelain.”

Astoria, like most works of music, has its flaws, and I can understand why people (particularly anyone who lived through the ‘80s) might raise their eyebrows at the extent of some of the homages.  But it’s still an amazing album that the band clearly put a lot of work into, and it stands out to me as one of my most listened-to albums of the past year.  It may not be as tightly cohesive as Ever After, but Ramsay bares his soul on Astoria, and it pays off in creating an impressively emotional and honest musical experience.

Tags: astoria, burning up, concept albums, dearly departed, end of an era, ever after, forget me not, marianas trench, masterpiece theatre, one love, pop rock, shut up and kiss me, who do you love